Difference between wire and cables

WIRE:-A wire is a single strand or a group of strands of an electrically conductive material, usually aluminium or copper. A cable consists of two or more insulated conductors and can be either bare or covered. The easiest way to distinguish between the two is that the wire is usually visible, whereas a cable is most usually insulated. 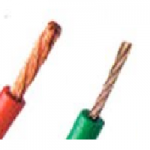 There are two main types of wires-solid or stranded. A solid wire is usually a long length of single conductor. A stranded wire is many thin strands of wires twisted together. Solid wires offer low resistance and are perfect for use in higher frequencies, whereas a stranded wire has a longer life, due to its flexibility and can be used for a longer period than a single conductor.

Wires are mainly used to carry electrical and telecommunications signals, but can also be used in various other forms, from bearing mechanical loads, to heating, to even in jewellery and clothing.

CABLES -A cable is usually two or more wires running together or bonded, twisted or braided together. They are usually insulated rather than not, which gives them a better protection than just wires. Cables are mainly used to carry electrical and telecommunications signals.

Nuts Selection as per Bolt diameter

Nuts Selection as per Bolt diameter